Anyone watching the gold and silver market understands that something is not right. An objective look at the fundamentals suggests that there seems to be no substance behind the recent downwards move.

There has been a constant debate over the years on what drives the price of gold and silver. Obviously we have the fundamentals that have put the metals in a bull market for the last 10 years. The powers that be have total control over money, as they set the price for capital via manipulating the interest rates. So it is not a stretch that they would be concerned with a rising gold price because gold is a threat to how the current fiat regime functions on a day-to-day basis.

Without Mr. Bernanke able to step in and buy US treasury bills, where would interest rates be? How would we fund our deficits?

These are just some of the reasons why it is important for the elites to pay attention to the price of gold and silver. Knowing this, the powers that be have instructed their banking arms JPMorgan, HSBC, Goldman Sachs and the like, to create paper derivatives to help manage the price.

But what happens when we get to a threshold point where the physical market breaks the back of the paper derivatives? We think that this time is near.

We think this, along with other technical indicators, is screaming BS on the paper gold and silver game. If you take a look at the chart below, you can see that the indicator has confirmed this bull cycle as money has continued to move out of paper assets and into the physical. Currently we see an extreme divergence: 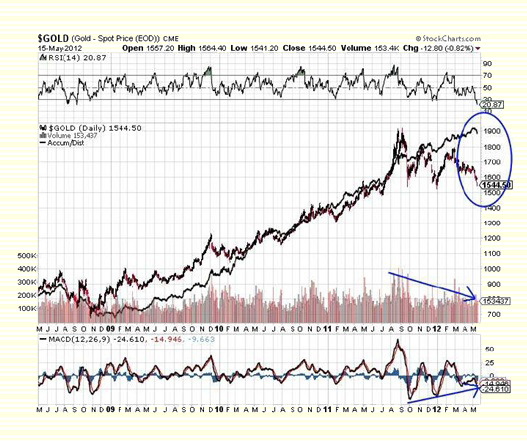 The volume and the Moving Average Convergence/Divergence (MACD) are also calling BS on this latest paper assault on the metals prices. It is even more obvious when you look at this chart of silver below: 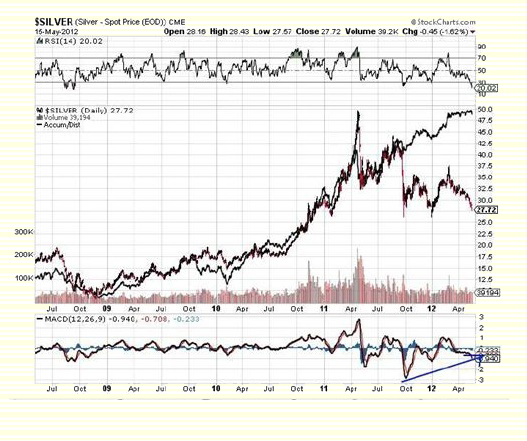 The recent lower volume in the metals and the related mining shares are not confirming this move lower.

If the gold and silver price were to have kept a correlation with this indicator we would currently see close to $1900 and $50 silver. Our experience tells us that this type of disconnect usually ends in violent corrections to the norm. In this case it could mean that we are witnessing the straw that breaks the paper gold and silver games’ back.

There is an even more extreme disconnect in the related mining shares. We have just witnessed a silver producer lose 10% ($15 million in market cap) off a $250k market sell order. The shares are now in the strongest of hands; the problem is that most of the strong hands are fully invested at this point, allowing an emotional mom and pop liquidating their 401k position due to mass fear in the markets to knock down the price significantly.

To us the writing seems to be on the wall for an “event” to take place. Fortune picked up a story on April 6, stating: “After completing a series of public lectures in Washington, D.C. last week, Federal Reserve Chairman Ben Bernanke quietly slipped into New York City for a private luncheon on Friday with Wall Street executives.

Sources say Bernanke spoke at length about monetary policy, in an apparent effort to persuade attendees that they needed to take a more active role in helping to deal with the European debt crisis. He spent virtually no time discussing regulation, although that mantle got taken up by both Dimon (domestic regulation) and Schwarzman (global regulation).”

Another red flag was the recent 2 billion dollar loss JPMorgan announced because of a bad bet with credit derivatives.

We are also seeing bearish divergences in the fixed income market.  The recent breakout of the IEF which represents the Barclays 7-10 year Treasury Bill fund was not confirmed by the MACD, Accum/Dist, or volume.

Don’t be fooled by this latest market mirage.
Get into physical metals, especially silver!!

Paper silver contracts are being dumped on the market

J.P. Morgan to pay $1.42 billion to settle some Lehman claims