Image: Aleppo International Airport (Wikipedia). With dozens of dedicated military airbases and airfields to choose from, NATO-backed terrorists have decided instead to target Syria’s two main civilian airports, not because of military or defensive objectives, but to terrorize Syria’s population, undermine the government politically, and paralyze civilian infrastructure. This unconscionable act of blatant terrorism will have no impact on Syria’s security operations and is yet another demonstration of the absolute illegitimacy of both the so-called “Free Syrian Army” and their Western sponsors.
….

September 1, 2012 – Syria has over 15 military airbases, including dedicated airbases located near Aleppo and Damascus. These airbases are generally surrounded by networks of military infrastructure including storage depots, barracks, motor pools, and defensive positions. So much as even denting these facilities would require a standing enemy army, airpower, and armor – something the terrorists operating in Syria with NATO backing currently lack. Even a successful, concentrated attack on a single airbase would make little difference tilting the balance of power in favor of NATO-backed foreign terrorists operating under the banner of the so-called “Free Syrian Army” (FSA). 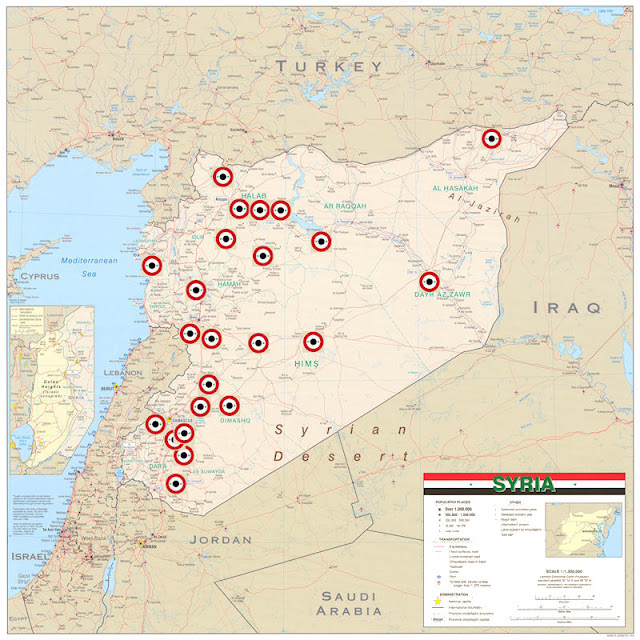 Image: (via GlobalSecurity.org) Syria has over 15 dedicated military airbases located across the country, including bases within effective range of Damascus and Aleppo. Many more airbases either are, or can easily be converted into dual military/civilian use. Additionally, helicopter airfields can be set up ad-hoc nearly anywhere. The latest threat then, by terrorists operating in Syria against the nation’s two main international airports is a craven act of terrorism seeking psychological, not military, and certainly not defensive objectives. The West’s continued support of the so-called FSA, and the UN’s continued silence has entirely eviscerated both their collective legitimacy and the primacy of “international law.”

Puzzling then was an announcement made by NATO terrorists, warning that in 72 hours, starting September 1, 2012, they would begin operations to target Syria’s two international airports, Damascus International, and Aleppo International. The Telegraph would report that NATO’s terrorist front, “warned it would target civilian planes using the airports in Damascus and Aleppo from tomorrow.” The Telegraph would also claim, “it [the FSA] suspected government was using the flights to bring in weapons.” Like all of NATO terrorist claims, no evidence has been provided by either the militants, or the Western press.

The Telegraph has just reported that terrorists are planning to shoot at civilian planes and paralyze civilian flights across the country – a terrorist act by any definition or law.

Declaration of Terrorist Intend in Absolute Violation of International Law

Indeed, even corporate-financier funded faux-NGOs like Human Rights Watch (HRW) note that attacking civilian infrastructure, such as an airport can only be done if achieving a military objective outweighs the impact on civilians. HRW says specifically:

Civil airports, roads and bridges are civilian objects that become military objectives subject to attack if they are actually used for military purposes or military objectives are located on or within them. Even then, the rule of proportionality applies, requiring the parties to the conflict to weigh the short- and long-term harm on civilians against the military advantage served; they must consider all ways of minimizing the impact on civilians; and they should not undertake attacks if the expected civilian harm outweighs the definite military advantage.

Clearly, if the Syrian Air Force has 15 bases in addition to whatever they may or may not be using its two international airports for, terrorist attacks on its two main civilian airports in no way achieve military objectives proportional to the adverse impact such attacks will have on Syria’s civilian population.

Instead, the two airports have been picked to maximize terror against both the Syrian people and government forces, as well as undermine Syria politically on the international stage. In other words, they are craven acts of terrorism designed to achieve a political, not military objective – to attack, not defend Syria’s civilian population. And it will be craven terrorist attacks carried out with funding, arms, and logistical support provided by the US, UK, Israel, NATO-member Turkey, and the Gulf State despots of Saudi Arabia and Qatar.

The attacks will have absolutely no impact on Syrian security operations, and will instead simply paralyze civilian infrastructure and inevitably cost civilian lives. It will serve to panic the Syrian people, thus creating yet more refugees with which NATO will then claim demands foreign military intervention in the form of long sought-after “safe havens.” Essentially, NATO is purposefully encouraging an atmosphere of terror and panic, then using the resulting refugees and humanitarian crisis as political bargaining chips.

The silence of the UN in the face of this bold declaration of terroristic intent, as well as its utter indifference toward US, NATO, GCC, and Israeli sponsorship of terrorism and purposeful creation of humanitarian catastrophe, further undermines both the organization itself and the primacy of “international law” it is charged with maintaining.

Now more than ever, nations as well as individuals must begin both boycotting these failing institutions while replacing them with viable alternatives.