France to fund and arm al-Qaeda in Syria

The French government has ignored the will of voters who ousted warmonger Nicolas Sarkozy in recent elections, and is continuing its unpopular military adventurism abroad as well as its support for militant terrorism across the Arab World.

France has announced that it will be funding and arming terrorists operating along Syria’s borders, offering them heavy weapons, just as they did in Libya last year. In fact, the US-British and UN-listed terrorists assisted into power in Libya, are now leading death squads currently ravaging Syria – disingenuously portrayed as “indigenous” “freedom fighters” by the Western press. 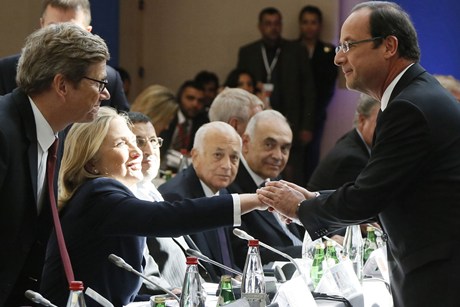 Image: Hollande (right) after paying lip service to French voters, set out almost immediately betraying campaign promises to end foreign military adventurism and is in fact picking up right where ousted Nicholas Sarkozy left off, leading the West’s destabilization and destruction of Syria through funding the very Libyan terrorists his predecessor assisted into power in Tripoli.

….
The Hindu, in their article, “France to fund opposition in Syria,” reported:

“Reuters quoted a “diplomatic source” as saying France had started supporting parts of Syria that are apparently being controlled by the armed opposition. More alarmingly, the report pointed out that Paris was considering supplying heavy artillery to anti-government fighters — a move that would harden the possibility of a full-blown civil war in the country.”

International condemnation led by Russia, China, and Iran have pointed out that the so-called “armed opposition” constitutes sectarian extremists, many of which have direct ties to Al Qaeda, many of which are also not even Syrian, betraying the West’s unraveling narrative. France’s recent announcement is particularly unconscionable, considering that Syria’s so-called “opposition” has recently announced their intentions to begin targeting civilian infrastructure, a blatant war crime.

Evidence stretching back as far as 2007 has exposed a Western conspiracy, years in the making, intent on using sectarian extremists under the guise of “pro-democracy” “regime change’ to violently overthrow the government of Syria and undermine Iran’s influence throughout the Middle East.

A report published in 2007 by the New Yorker titled “The Redirection” (full article here), cited US, Saudi, and Lebanese officials who admitted that military and financial aid was already flowing to militant groups affiliated with both Al Qaeda and the Muslim Brotherhood with the aim of destabilizing Syria and Iran. Former intelligence agents were also cited, warning that the plan, then being implemented under the Bush administration, would lead to a catastrophic sectarian bloodbath – the very sectarian bloodbath now unfolding in Syria today.

France, along with the UK, US, the autocratic Saudi and Qatari regimes, as well as NATO (specifically Turkey) have meticulously planned and created the very violence they now seek to use as justification for further military intervention. In reality, they are employing the very terrorist forces against Syria they have used as an impetus to send their own soldiers to their needless deaths in both Iraq and Afghanistan for over a decade as part of the “War on Terror.”

Meanwhile, in Iraq, violence tore across the nation as former-vice president Tariq al-Hashemi was sentenced to death for his role in using death squads against his political rivals. While the Western press attempts to frame the power struggle within Iraq as one of an isolated sectarian nature, in reality, al-Hashemi, who is being coddled by Saudi Arabia, Qatar, and Turkey, represents extremist elements backed by Saudi Arabia, the United States, and Israel, while Iraq’s current government is attempting to cultivate closer ties with Iran. 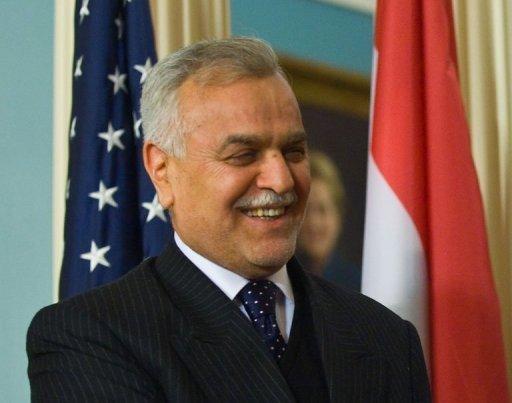 Image: Vice president of Iraq, or viceroy of US-Saudi-Israeli interests? With ex-Vice President Hashemi now hiding abroad and being handed down a death sentence, Iraq has seemingly taken a decisive stance against Hashemi and his foreign backers. The West is now using the threat of igniting sectarian violence once again across Iraq as leverage against the current Iraqi government.

….
The terror wave crossing Iraq is being carried out by fighters who are currently operating on both sides of the Syrian-Iraqi border, indicating that Iraq, as well as Syria and Iran are being targeted by US-Saudi-Israeli backed militants. The violence is connected, and part of a greater strategy to reorder the Middle East against Iran, and ultimately against Russia, China, and all other potential threats to Wall Street and London’s global hegemony.