What do you and your family eat each week? You may be shocked to see the significant variation even between relatively ‘similar’ nations when it comes to diet. While many families within the United States and Mexico include fast food and soda into the core of their nutritional program, families from nations like Bhutan survive off of traditional base food items like vegetables and grains. It is easy to see why disease rates are skyrocketing in many developed countries, where nutrition is not held to a very high regard.

Amazingly, the United States also spends more on healthcare than any nation in the world. Despite spending $7,960 per capita, the United States has been ranked dead last when it comes to the quality of care. The fact of the matter is that when food intake is ignored — along with the subsequent toxic ingredients that go along with the processed food addiction — disease will arise. In the telling pictures below, taken from the book ‘Hungry Planet: What the World Eats’, you can see what the average family from each nation eats over the period of one week. 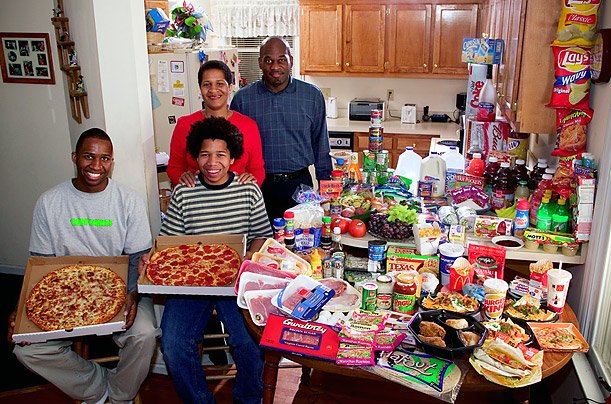 This family from North Carolina eats a diet almost entirely of processed and pre-prepared foods with heavy amounts of junk and fast food. Consuming mostly sugar-laden ‘fruit’ drinks and mega-sized sodas from Burger King and McDonald’s, this average American diet will ultimately lead to chronic disease and rampant sickness. Some favorite foods include pizza and fast food. 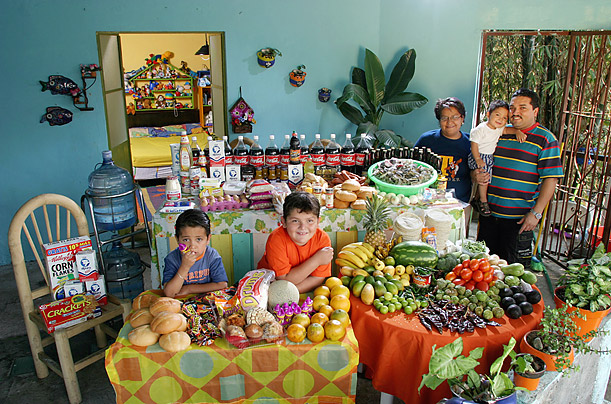 Families in mexico also tend to consume sugary sodas and processed foods, though their fruit and vegetable intake is higher than the United States families observed. The family lists their favorite food items as pizza, pasta, and chicken. 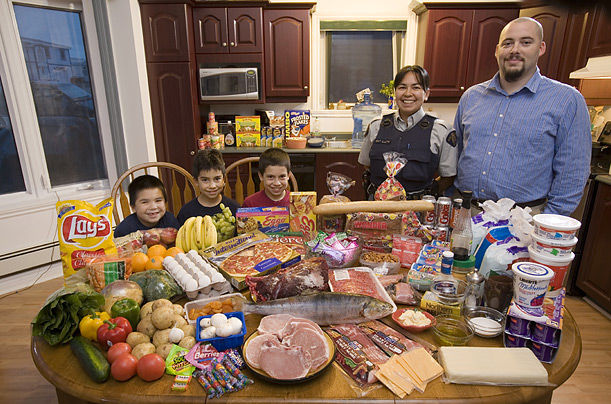 Enjoying some of the same processed items as families from Mexico and the United States, Canadian families do consume processed chips and meats, though you will notice a more prominent display of vegetables and fresh fish on the table. An increased amount of yogurt and cheese is also featured. 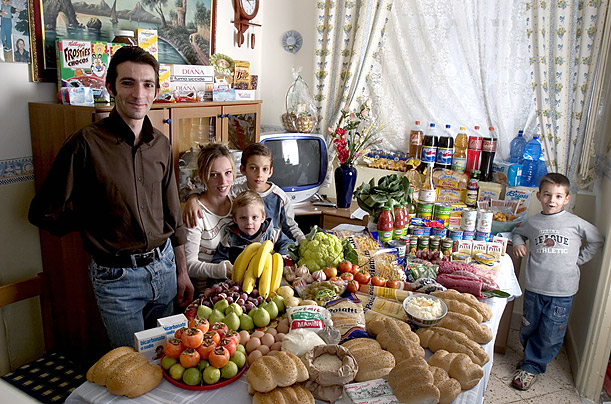 Italian families enjoy their bread, pasta, and assorted fruit. With grains a major part of the diet, along with other carbohydrate-rich foods, Italian families tend to forfeit some meal options high in protein for ‘traditional’ Italian dishes like pasta with ragu. While many of these items are fresh or even baked at home, Italian families still consume large amounts of sodas like Pepsi. You can see that this family drinks about 6 larger-sized bottles per week. 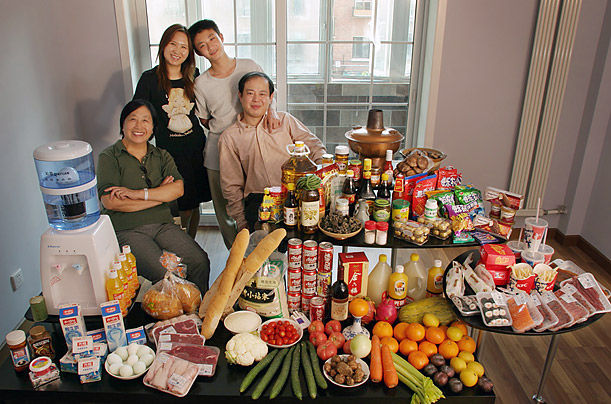 This Chinese family prefers fried shredded pork with sweet and sour sauce, listed as their favorite dishes. Eating processed food items mixed with packaged meats and fish, this Chinese family eats more fruit than vegetables, and their produce selection is one of the smallest besides the United States. 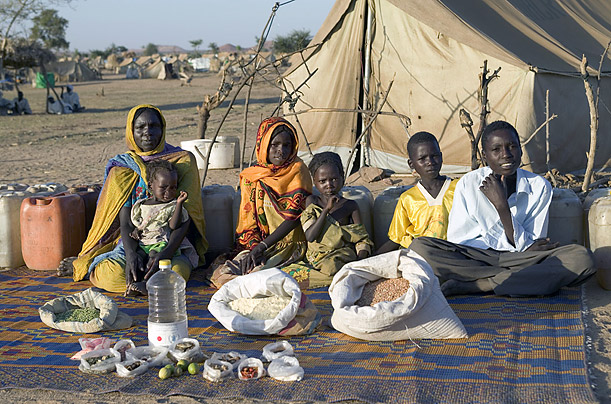 This family resides in the developing nation of Chad and spends only the equivalent of $1.23 per week on food to feed the entire family. Their favorite food is soup with fresh sheep meat. 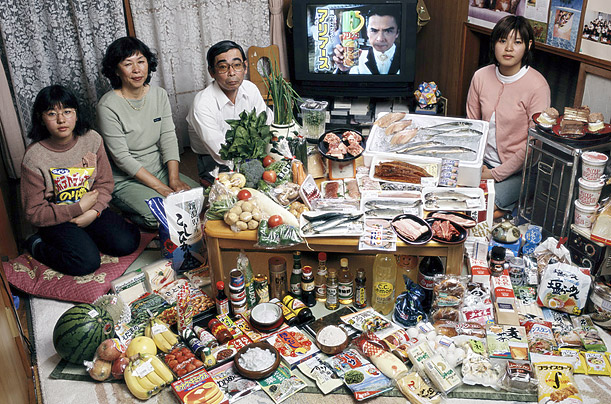 It may surprise you, but this Japanese family consumes a diet high in processed junk and sugary treats. They list their favorite food items as cake, potato chips, and sashimi. 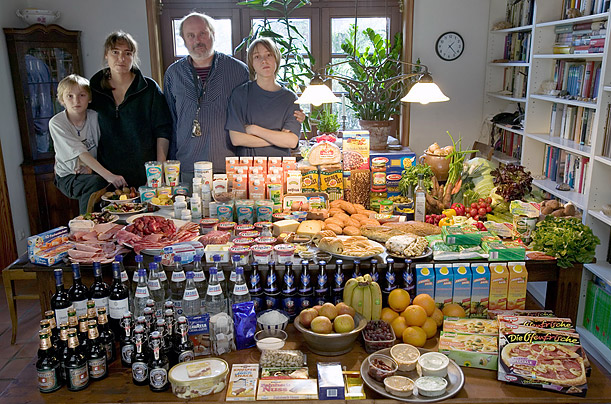 This German family has adopted an American-styled nutritional regiment, stating that their favorite foods are pizza, vanilla pudding, fried potatoes, and fried noodles. You may also notice the largely increased amount of beer and other alcoholic drinks over the other nations. 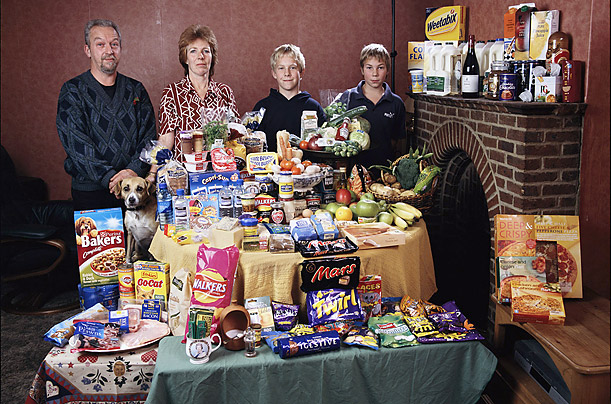 Spending over $250 per week on food, the average family in Great Britain is eating mostly processed meals and candy. This family’s preferred foods include chocolate fudge cake, mayonnaise sandwiches, and prawn cocktail.

The 8 Best Foods for Boosting Your Immunity

5 foods that destroy your immune system